It is privilege for Media Education Centre, Belgrade to be invited to participate on the Forum. We believe that cooperation with Central Asia Region is crucial for Education for Sustainable Development,  building knowledge Society and reach UN Millennium Goals.

This concept note defines the purpose, objectives, format, approach to the composition of participants and the Agenda, as well as cross-cutting issues and other topics of the First Regional “Central Asian Adult Education Forum” (hereinafter – the Forum) in 2016, which will become an annual event conducted by DVV International for Central Asia (Kyrgyzstan, Tajikistan, Uzbekistan).

The Forum is going to be a democratic communication and discussion platform for interaction of creatively thinking specialists (both theorists and practitioners) working in the field of Adult Education with a focus on non-formal education system. During the Forum meetings, discussions, creative workshops, brainstorming sessions and consultations with experts a free exchange of opinions, development of joint projects for future implementation and of various strategic documents outlining the vision of further promotion of the Adult Education conception in Central Asia will be conducted. Being on the one hand the new format of regional meetings, the Forum will continue to be held, as the previous event, in the format of “Summer Academy”, an educational platform for the partners, where they can improve their skills, exchange experience and knowledge. DVV International as an organisational structure the Forum will play a coordinating role in the establishment of regional relations and connections between the experts and partners of DVV International in three Central Asian countries, inviting them to work together, both at the Forum and in various temporary working groups and Expert Councils.

Hosts of the Forum

As the leading professional organisation in the field of adult education and development cooperation, DVV International provides worldwide support for the development and expansion of sustainable structures for youth and adult education. The Institute is currently working with more than 200 partners in over 30 countries in Africa, Asia, Latin America and Europe. Lake Issyk-Kul, which means “the hot lake” in the Turkic languages of Central Asia, holds the title as one of the largest alpine lakes in the world. At an altitude of 1,609 meters above sea level it is exceeded only by Lake Titicaca in Bolivia as highest of the large mountain lakes. Two mountain chains of the Central Tien Shan Range border the lake – in the north the Kungei-Alatau (in Turkic: “facing the sun”), and in the south the Terskei-Alatau (in Turkic: “turned away from the sun”). About one hundred large and small rivers flow down into the lake from these peaks, carving gorges and canyons into the mountain flanks. The largest of these rivers, the Tyup and the Jergalan, empty into the lake in the east. In the south, the largest rivers are the Karakol, Kyzyl-Suu, Juuka, Barskoon and Ton; in the north, there are two rivers called Aksu and three rivers called Koisu (Chon “Big” Koisu, Orto “Middle” Koisu and Kichi “Small” Koisu). There are no outlets for the waters of Lake Issyk-Kul, so the lake has a high salinity, actually tasting salty to bathers. 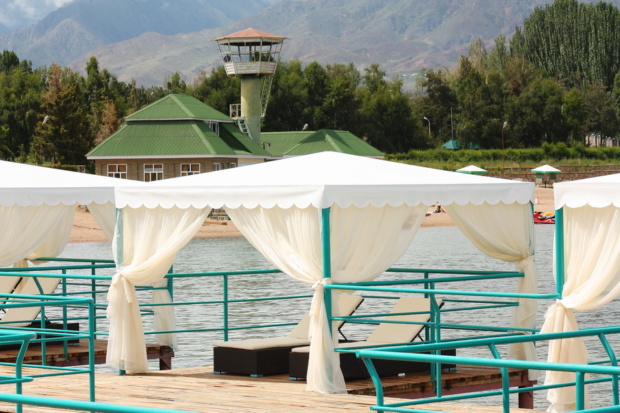 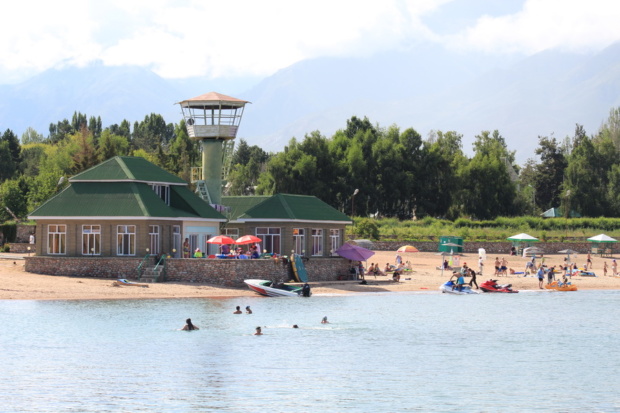 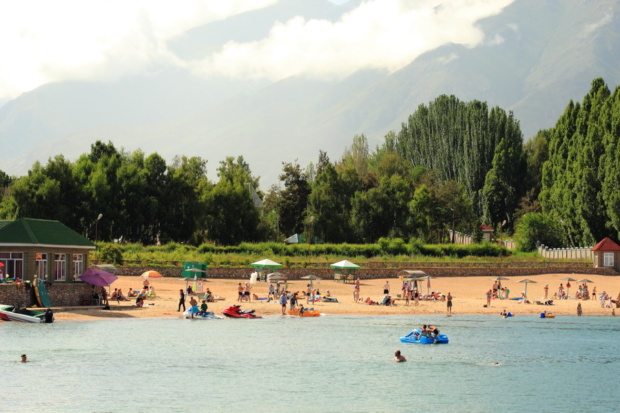 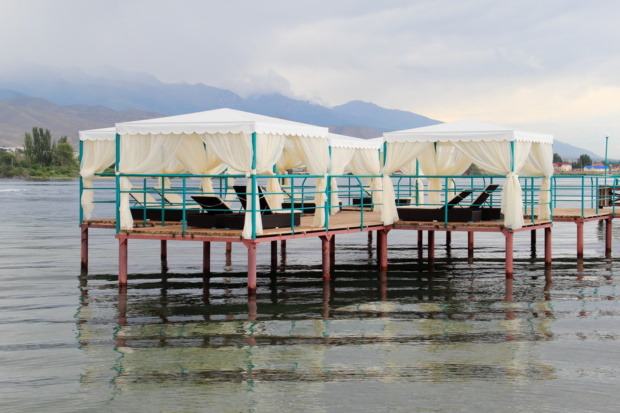 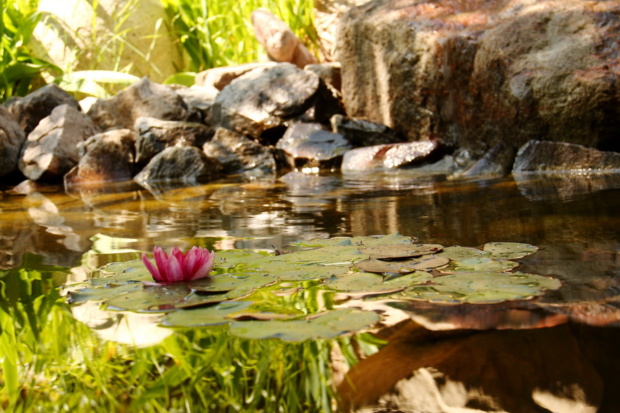 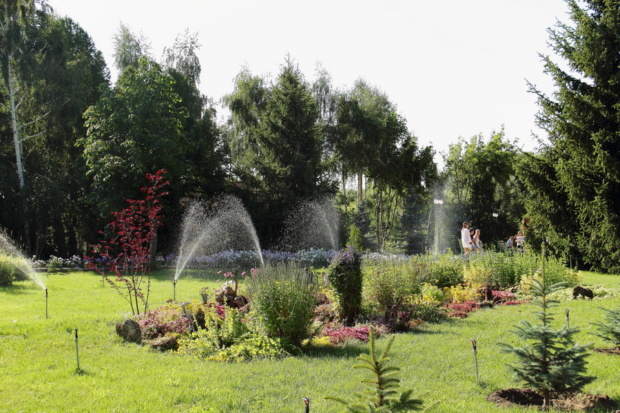 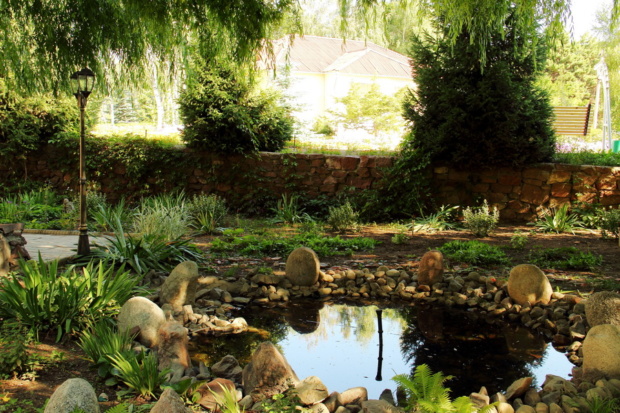 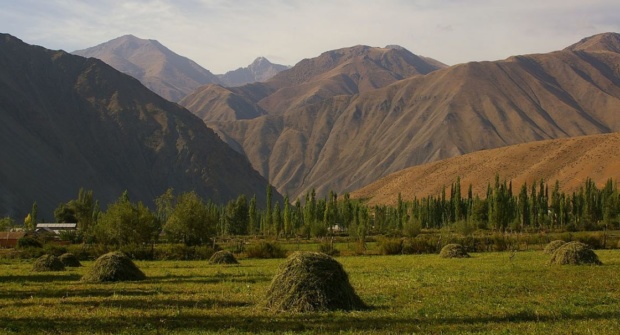 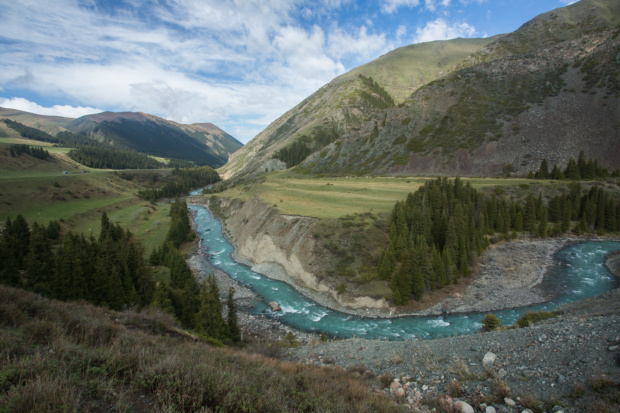 The most ancient mention of Lake Issyk-Kul can be found in Chinese chronicles. Chang Ch’ien, a Chinese explorer, set forth on a journey to the West in the year 138 B.C. He was captured by the Hsiung-nu (possibly the same people known by European historians as the Huns). During his captivity, he visited Central Asia and the mysterious tribes of the nomadic Yueh-chih, who at that time inhabited the lands around Lake Issyk-Kul. The traveler wrote that the land was rich in pastures and coniferous forests. In 629 A.D., Hsuan-zhang, a Chinese Buddhist monk on a pilgrimage to India, reached Lake Issyk-Kul generic cipro tablet after an arduous crossing of the Tien Shan mountains. The Chinese called the lake Zhehai “the warm lake”, as the lake never freezes, which completely corresponds with the Turkic name. “The color of the water is greenish-black,” wrote Hsuan-zhang, “its taste is salty and bitter at the same time. Wide waves either run in huge billows, or rise up and rush forward with uncontrollable force. In the lake dragons and fish dwell together, and unusual monsters sometimes appear from its depths. This is why travelers pray for their safe passage.

The Kyrgyz retell many legends about how the lake was formed, about ancient cities and the catastrophe that drowned them, when water poured out of the mountains and flooded the valley. One legend claims that Alexander the Great flooded the valley to comply with the desire of a Persian hero, Rustem, who reigned in Andijan and possessed the lands around Issyk-Kul. Before his death Rustem wished that the bones and relics of his companions-in-arms and ancestors should be inaccessible forever. After the conquest of the lands around Lake Issyk-Kul, Alexander decided to execute the last will of the hero. From a girl who had fallen in love with him, he learned of a well that could flood the whole valley. His beloved gave Alexander a casket with a key to the door that covered the entrance to the well. Opening the door, the well bubbled over with flood waters which submerged the surroundings. There is also a legend stating that it was Tamerlane in the 15th century who decided to destroy the rebellious cities around the lake. According to another of the legends, in the city was a spring from which water flowed out with such a force that each person coming for water, after filling a bucket, hurried to cork up the well’s throat with a heavy stone. It happened that a young man met a young woman at the spring and they tarried too long with love chatter. Forgetting to replace the stone on the fountain, the rushing water flooded not only the city but the whole valley as well.

Once upon a time, so long ago that people have forgotten when, there was a city by Lake Issyk-Kul. A fortress of a powerful khan dominated the city. The terrible governor learned that one poor nomad had a daughter of incomparable beauty. The khan sent his jigits to bring the girl to him. However, the girl had a beloved young man, who, before leaving for distant lands, put his ring on the beloved’s finger and asked her not to remove it until he came back. “It will protect you from any misfortune!” the young man said. The khan’s envoys brought generous gifts to the girl’s parents, but she rejected the gifts stating: “I love another and cannot become a wife of the khan!” When the khan’s jigits grew more insistent, the girl escaped to the mountains in an attempt to hide herself from them. All of a sudden, with horror she found out that the ring on her finger had disappeared. The girl came back to the village in the hope of recovering the lost ring, but the servants of the khan seized her and took her to his camp. The khan imprisoned the intractable girl in the fortress and tried various means of persuasion to woo her for himself. His efforts were all in vain. “I love another and I shall never be yours!” This was the beauty’s answer. Having failed to enjoy the girl’s favor by gifts, the khan decided to possess her by force. Like a beast, he charged towards the girl intending to overpower her. But she rushed to the open window and threw herself out. Suddenly the unassailable walls shook, the earth split and water gushed out of a crevice washing away the fortress and the whole city, continuing to pour out until the whole valley disappeared under the lake.